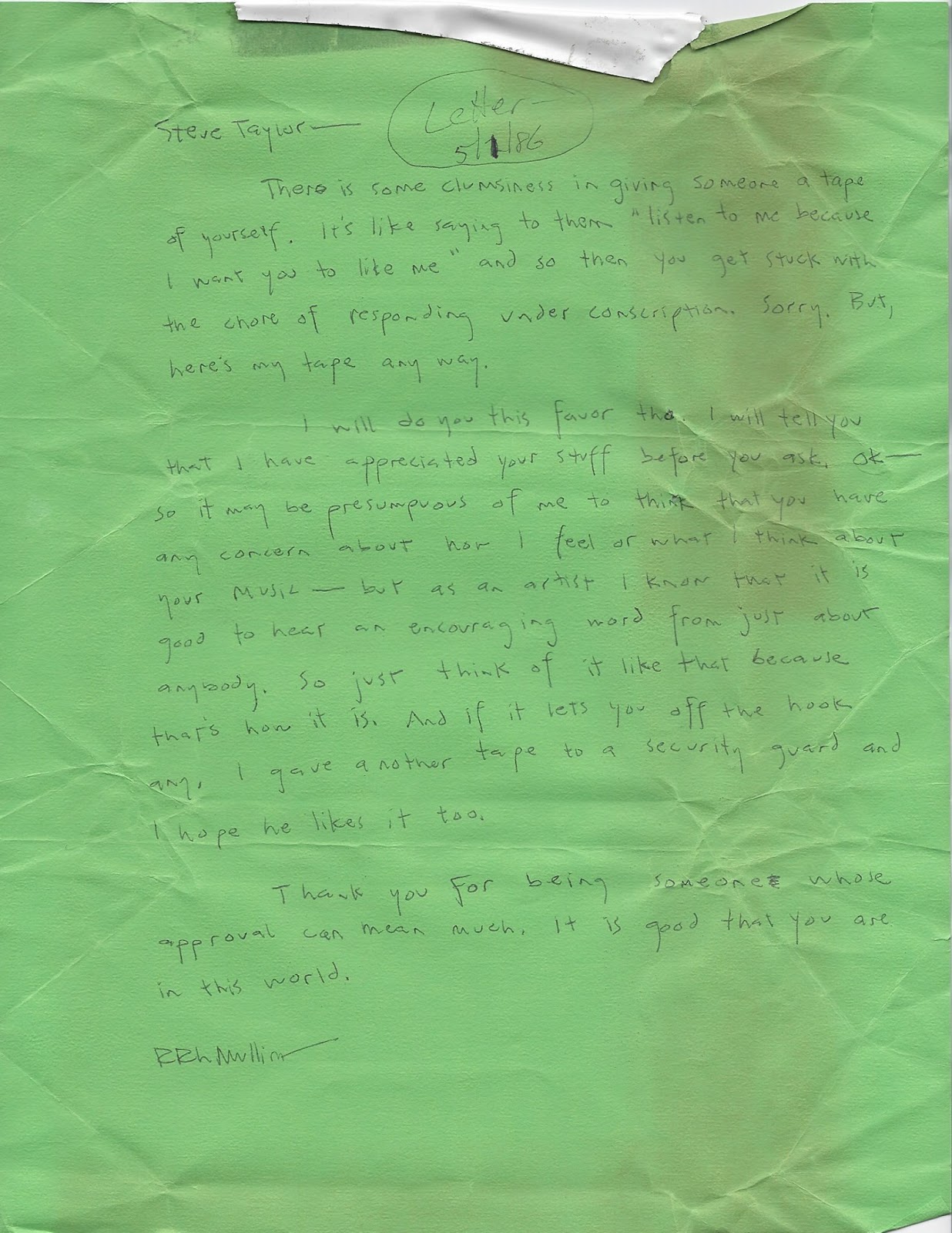 I just
became aware of one of the great moments in music history. On May 1st,
1986, two music legends became entangled in the delicate business of admiration
for one another and self-promotion. In 1986, Rich Mullins was an upstart
singer-songwriter with a solo career. Amy Grant had recorded one of his songs
(Sing Your Praise to the Lord) in 1981 but his own career as an artist had not
yet taken off. So, in 1986, Rich Mullins decided to write a letter to Steve
Taylor. At the time, Steve Taylor was a rising star in the Christian Music
industry. His album, Meltdown was
released in 1984 and the title track, “Meltdown (at Madame
Tussauds)” was played on MTV. By 1986, Taylor had received a Grammy
nomination and had released the album, On
the Fritz.
Mullins looked to Taylor as someone whose approval meant
much and so he decided to catch his attention. The letter he wrote tells us
something about Mullins’ personality, humor, and desire to succeed in the music
business. Here is what he wrote:
5/1/86
Steve Taylor –
There
is some clumsiness in giving someone a tape of yourself. It’s like saying to
them “listen to me because I want you to like me” and so then you get stuck
with the chore of responding under conscription. Sorry. But, here’s my tape
anyway.
I
will do you this favor that I will tell you that I have appreciated your stuff
before you ask. Ok – so it may be presumpuous (sic) of me to think that you
have any concern about how I feel or what I think about your music – but as an
artist I know that it is good to hear an encouraging word from just about
anybody. So just think of it like that because that’s how it is. And if it lets
you off the hook any, I gave another tape to a security guard and I hope he
likes it too.
Thank
you for being someone whose approval means much. It is good that you are in
this world.
RRhMullins

I wish I knew what Steve Taylor did with the tape he
received from Rich Mullins. Perhaps I will be able to sleuth out some more
details and post them in a future blog. Yet, simply as this letter stands, it
represents a great moment in music history.