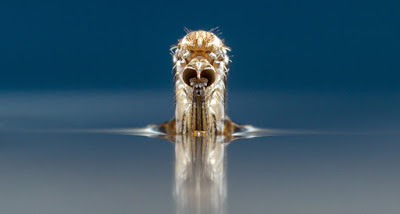 Photo credit: Alex Wild[1]
(Click on the photo to get a larger image.)
This terrifying picture shows an Aedes aegypti mosquito rising out of the water immediately
after it has metamorphosed from its larval stage. Without a sense of scale this
creature looks like some dragon from a Peter Jackson film. Despite the fact
that it is just a mosquito, the insect is none-the-less horrifying. This is the
mosquito that carries the Zika virus that has been plaguing much of the
tropical zones of the world. This is not a new virus; it has been documented as
early as 1947. For some people the Zika virus causes nothing more than a rash
and flu-like symptoms. What is new is the link between Zika and two conditions
in humans. There is growing evidence that the Zika virus can induce microcephaly
in the fetuses of pregnant women and that Zika may trigger Guillain-Barré
syndrome (a disorder in which the body’s immune system attacks part of the
peripheral nervous system[2]).

Scientists
and the World Health Organization are extremely concerned about the effects of
this virus and are working hard to develop vaccines and ways to combat the
mosquito. It is now known that the Zika virus can infect and kill neural
progenitor cells in vitro and this
may be the mechanism by which it causes microcephaly.[3]
The world waits as more research and vaccine trials occur. Let us hope and pray
that effective solutions may be found.