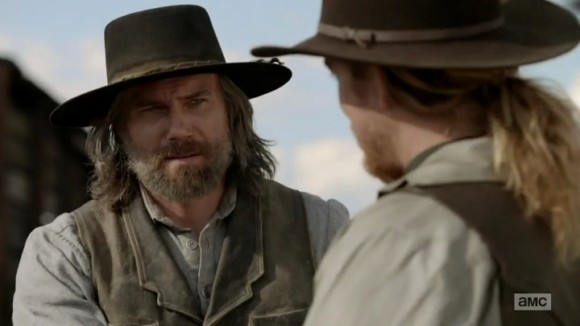 The television series Hell on
Wheels continues to intrigue me. The writers and director have done a great
job of creating interesting questions for us to ponder. This scene from Season 4,
Episode 11 is a good example. Cullen Bohannan has just walked into the room
where Sydney Snow is recovering from being shot by Ruth Cole. If Sydney dies,
Ruth, the “Church Lady,” will be guilty of murder; so Cullen has worked hard to
see that Sydney Snow survives. The following dialogue then occurs.

Is Bohannan a man of integrity, or an evil, vindictive man like Sydney Snow? Notice
the double meaning of the words in Cullen’s reply to Sidney: “Nowhere’s good.”
Does Cullen mean, “We will not be going to any place that is good.” Or does he
mean that “‘Nowhere’ would be a good place for them to ‘end up’? Cullen
Bohannan has killed many men. Some of the killings were clearly wrongful; others were
a form of execution for persons who deserved the death penalty. Perhaps he is hoping that there is no after-life where he will be held accountable for his deeds. By episode four
of the series, Cullen seems to be seeking to live a good life and repent of his
past. At one point he puts away his guns and seeks to live a pacifistic life;
but the circumstances of the world, and evil men like Sydney Snow, cause him to
regretfully put on the gun belt and punish those who harm women and kill
children. Where does a man like Cullen Bohannan “end up?” He has repeatedly
ignored the offers from Ruth and her preacher father who encouraged him to turn
his life over to Jesus. Bohannan is reluctant to turn to the church and to
Jesus at either the Congregational Church or the Mormon Church because he seems
to believe that he is unworthy of God’s grace. What will become of Cullen
Bohannan? Perhaps Season Five will make things clearer.
[1] “Hell
on Wheels: Bleeding Kansas (#4.11)” (2014); http://www.imdb.com/character/ch0259730/quotes
Tags: Cullen Bohannan, integrity, Mocking God Doing good selfish spiritual Galatians, westerns; movies; stories; evil