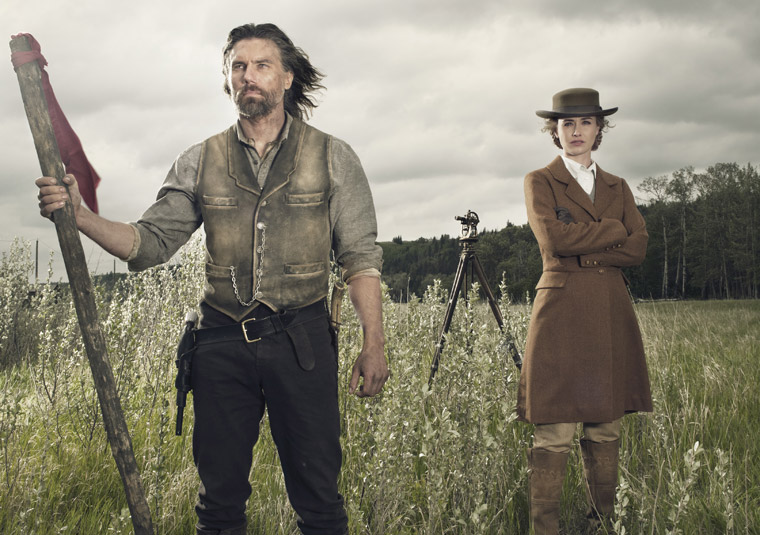 The AMC original television series, “Hell on
Wheels,” is the new “Breaking Bad.” Both feature
anti-heroes: men for whom we cheer and hope will survive, at least until the next
episode, even as they leave a trail of death behind them. Both Walter White (“Breaking
Bad”) and Cullen Bohannan (“Hell on Wheels”) are men who have
been broken by tragedy in their past; and because of the tragedy, each becomes
an outlaw and murderer. Both live lives driven by their individual sense of
justice. Of the two of them, Cullen Bohannan is the man with whom we can
empathize and perhaps understand a little more. The horrific death of his wife
and son, at the hands of a renegade troop of Union soldiers during the Civil
War, has left him searching for the evil men who raped and hung his wife. As he
tracks each killer he is confronted by the depravity of the western frontier
where “justice” is meted out by men of power to further their own
interests rather than to achieve a just society.

At some point in the storyline we realize that the
integrity of Bohannan may indeed be greater than the integrity of those around
him. He achieves a measure of justice by executing those who have tortured and
killed numerous men and women; he feels remorse when he discovers he has killed
a man who was not involved in the slaying of his wife; he is true to his role
as a legally appointed lawman and fulfills his duty in hanging those who
confess to murders; he protects the interests of the poor and oppressed; and he
searches his heart and reforms his character as he becomes a husband and a
father to his new wife and son.
Certainly, no one would suggest that Cullen Bohannan
is a model for our own behavior or that he accomplishes his goals in a proper
manner. Bohannan is indeed a fallen man who achieves a level of notoriety and
respect because he seeks to have an integrated sense of justice (individualized
as it is) that keeps him true to what he believes is right. Indeed, in Season
Five, two of the characters will debate whether Bohannan is a loving husband
and father or the devil himself. We await the release of the final episodes to
clarify the verdict, but at least one person has already rendered her judgment
upon this question. In Season Three, Louise Ellison, writer for the Cheyenne
Leader has this to say about the man.

In the
brave new frontier he calls home, integrity is important to Cullen Bohannon.
Whether a man of integrity is what’s needed to build the nation’s first
transcontinental railway, we don’t yet know.The railroad
has always been the business of the unscrupulous and corrupt. I suspect our new
Chief Engineer to be neither, a change of pace from railroad men of the past,
the slick industrialists who made themselves rich at the expense of the U.S.
treasury and the American public.Challenging
times lay ahead, but Cullen Bohannon seems prepared to face them head on. He’s
plagued by a fierce determination, an unbending will to finish this railway no
matter the personal cost. He is a fighter. A survivor. A builder. For that,
dear reader, we might all count our blessings, and say a prayer.1