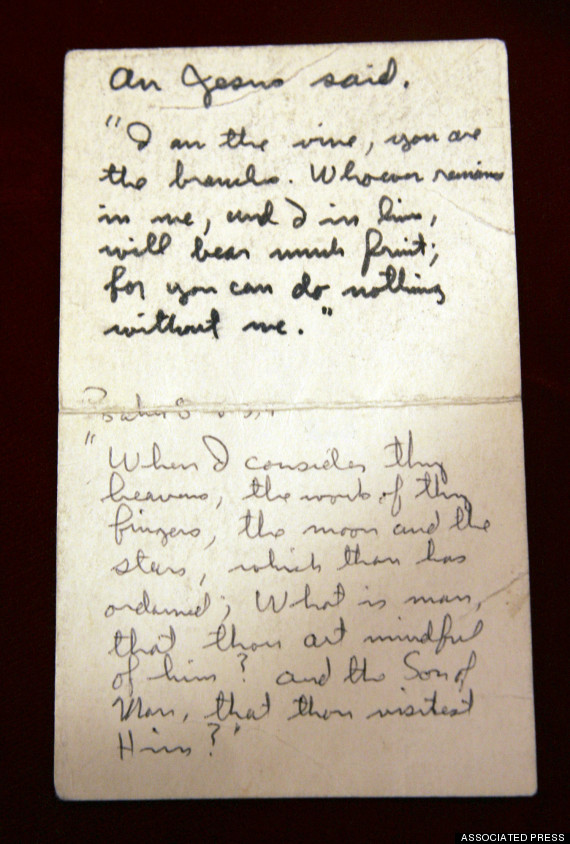 Edwin
Aldrin, better known as Buzz Aldrin, turned 85 last January. If he can
celebrate a few more birthdays he will be on track to celebrate the 50th
anniversary of the first manned moon landing on July 20th. Aldrin
piloted the Apollo 11 Lunar Module (LM) to the surface of the moon and landed
it at 20:18 UTC on July 20, 1969. Six hours later at 02:56 UTC on July 21,
1969, Neil Armstrong and he stepped onto the surface of the moon.

Aldrin,
an elder in the Webster Presbyterian Church, had decided to take a home
communion kit with him on the flight to the lunar surface. While still in the
LM he spoke these words over the radio contact with mission control.

I’d like to take this
opportunity to ask every person listening in, whoever and wherever they may be,
to pause for a moment and contemplate the events of the past few hours, and to
give thanks in his or her own way. (Listen to the recording here)

He
then read a portion of the Bible to himself, ate a small piece of bread, and
drank a tiny chalice of wine as a brief ceremony known as communion. Webster
Presbyterian Church in Webster, Texas has the chalice used for communion on the
Moon, and commemorates the event annually on the Sunday closest to July 20 with
what has come to be known as Lunar Communion Sunday.
Buzz
Aldrin has lived an incredible life which has been described in his book Magnificent Desolation. It tells of
moments of greatness like his contributions to the Apollo landing and his
discovery of an Earth/Mars orbit called the Aldrin Cycler; but it also tells of
times of depression, alcoholism, and marital struggle. Aldrin later stated that
he has now had second thoughts about how he celebrated the moon landing.

Perhaps, if I had it to do over
again, I would not choose to celebrate communion. Although it was a deeply
meaningful experience for me, it was a Christian sacrament, and we had come to
the moon in the name of all mankind — be they Christians, Jews, Muslims,
animists, agnostics, or atheists. But at the time I could think of no better
way to acknowledge the enormity of the Apollo 11 experience than by giving
thanks to God. It was my hope that people would keep the whole event in their
minds and see, beyond minor details and technical achievements, a deeper
meaning — a challenge, and the human need to explore whatever is above us,
below us, or out there.

Edwin
“Buzz” Aldrin is certainly an interesting and complex man. He has the capacity
to inspire us to do great things and dream big. He has also learned to give
thanks and live a grateful life. May he inspire us to do the same.
Works Cited:
Huffington Post, The Moon Communion Of Buzz Aldrin That NASA Didn’t Want To Broadcast; Posted: 07/19/2014 http://www.huffingtonpost.com/2014/07/19/moon-communion-buzz-aldrin_n_5600648.html
Webster Presbyterian Church website; http://www.websterpresby.org/content.cfm?id=314
Wikipedia, Buzz Aldrin, https://en.wikipedia.org/wiki/Buzz_Aldrin
Tags: Aldrin, Apollo, Armstrong, cosmology faith science God chaos order, future