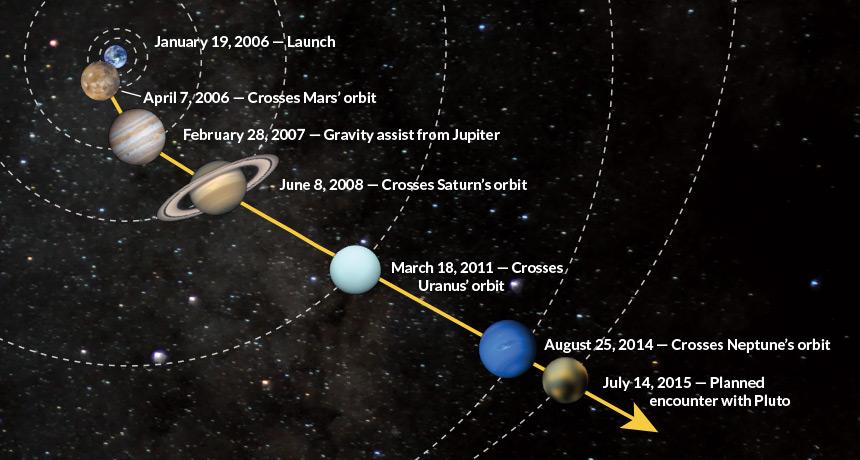 Click on the thumbnail photo for a larger image.

A few days ago this site focused on the Cassini Spacecraft and its mission to the moons of Saturn; but, that is not all that is going on in the far reaches of our own solar system. The “New Horizons” spacecraft is due to reach Pluto in just a few days on July 14th. Pluto, now officially known as a dwarf planet, will have a brief visit from the probe before New Horizons sails past Pluto and out into the cold, barren space beyond. New Horizons launched on January 19, 2006 making it a relatively fast trip to Pluto. It took the spacecraft only 9 hours to cross the orbit of our moon (a journey that used to take three days in the Apollo era) as it traveled at 58,000 kilometers per hour.

Pluto itself still holds much interest for NASA scientists. It is the “final frontier” before spacecraft explore beyond the confines of our neat and tidy system of planets revolving around the star we call our sun. Pluto is an extremely cold world which has been warmed only a little by her star. This means that for 4.5 billion years its surface has remained much the same without the effects of rapid warming and cooling. We will get a glimpse of one variation of what a planet looked like at that time. It is also the largest representative of the many dwarf planets and comets that orbit in the Kuiper belt. Pluto has five known moons that will be visible during the very quick tour.

One might ask why the probe will travel past Pluto so fast? The mission has been called “nearly a decade of boredom capped with hours of terror”1 since the approach will take a matter of hours and the actual transit time across the face of Pluto will last three minutes. New Horizon has been in sleep mode during most of its journey across the solar system with annual “wake-up calls” to check instrumentation. The reason for the fast trip and quick engagement with the dwarf planet is related to the cold. Pluto is headed into the cold portion of its orbit around the sun. It is presently getting further and further away and it takes 248 earth years to make a revolution. As it gets further from our star the atmosphere gets so cold that it may freeze solid forming an icy shell around the planet. This would make it difficult, if not impossible to see the surface of Pluto. New Horizons needed to get there before the year 2020. Once the spacecraft gets there, it is impossible to slow it down. There are no large gravity sources to use for braking. So, for now, NASA must make do with a short flyby and quick cameras.