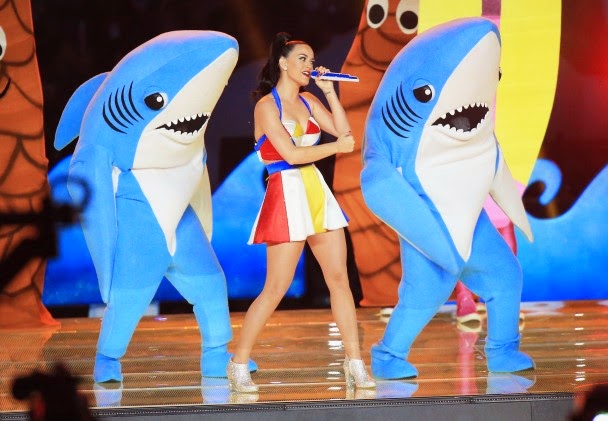 Since before the writings of Shakespeare, authors,
politicians, teachers, script-writers, and preachers have known that if you
want people to hear what you have to say and keep talking about it long after
the event, you must start with a spectacle. Shakespeare’s best-known example,
the three weird sisters (or witches) at the introduction of Hamlet, was designed
to capture and hold the attention of both commoners and royal family members.
The Half-Time spectacle at Sunday’s Super Bowl, piloted by Katy Perry, was an
attempt to do the very same thing; and people were talking about it after the
spectacle had fizzled down to a few late sparkler-type fire-works. The producers
of the show clearly had two audiences in mind. One audience was 72,200 University of Phoenix Stadium viewers and the other audience was the 114.5
million television viewers. This time both audiences were treated to the same
spectacle, but I wonder how long it will be before someone gets the idea of
delivering two different shows to the two distinct audiences.
The question that comes to my mind is this: how do the rest
of us mere mortals hope to get anyone to listen to us? Very few have the budget
that Super Bowl producers have to throw at a message. If I want to make an announcement
at church, I may throw in a small joke to keep people alert and focused, but I
have never considered riding a tiger puppet across the stage to make my point.
Well, okay, I did consider it, but the finance team wouldn’t give me the
budget.
And let’s compare the messages. Although coherent themes may
be hard to find, the message of the Half-Time Show, and the Super Bowl in
general, seems to be that, “You can do anything you want if you put your mind
to it and do your best to roar.” “You can be a shooting star.” “You can beat
the opposition with words and positive thinking before ‘the game breaks out.’”
In another place and another time, the message delivered in
most churches on Sunday mornings is far more consistent. In simple terms, the message
is “Love the Lord your God with all your heart, soul, and mind. Love your
neighbour as yourself.” Must we create a spectacle to get people to hear this?
Or are we missing a whole other medium? Rather than competing with the
spectacles, perhaps we could model a different message. Perhaps we could be the
simple Simon and Garfunkel with a guitar and straightforward harmonies. (Not a
bad idea for next year’s Half-Time Show.) Perhaps we could be Martin Luther
King Junior with a message of non-violence and a life-style of non-violence to
back it up. Perhaps we could be Jesus to the people of this overly entertained
continent.