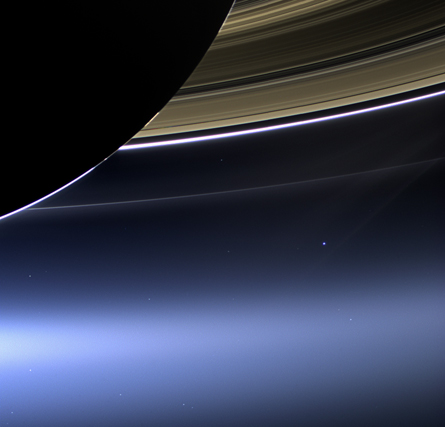 This picture brings to mind many science fiction stories and songs I have read and sung. I used to dream about being an astronaut and traveling to the far reaches of our solar system, then striking out for uncharted space. This is the kind of vision I would have when I imagined exploring the galaxy in a space vehicle. I can almost feel the immense loneliness of looking back at a planet containing everyone I know, and eight billion other humans.

The truth is, this picture was taken by a camera on board a man-made vehicle in orbit around the planet Saturn. The photo shows Saturn, the rings of Saturn, and Earth as a tiny blue dot just to the right of centre in the picture (the bright one). It was taken by the Cassini probe built by NASA and sent to a distance of 1.4 billion km from earth. This is of course still within our solar system; yet, it is hard to imagine distances larger than this.

Elton John sang about the loneliness of space in the song Rocket Man. I wonder what he would think of the photo.

And I’m gonna be high as a kite by then

I miss the Earth so much, I miss my wife

It’s lonely out in space

On such a timeless flight

And I think it’s gonna be a long, long time‘til touch down brings
me round again to find I’m not the man they think I am at home

Rocket man, burning out his fuse up here alone

Mars ain’t the kind of place to raise your kids

In fact it’s cold as hell

And all the science, I don’t understand

And I think it’s gonna be a long, long time ‘til touch down brings
me round again to find I’m not the man they think I am at home

Rocket man, burning out his fuse up here alone