When I was a kid, I used to look at my compass and imagine why one end of the needle pointed 17 degrees east of north. I imagined that there was a large chunk of negatively magnetized metal sitting just a little to the right of the north pole and another positively magnetized chunk of metal somewhere near the south pole of the earth. This naive way of thinking about the earth’s magnetic field was obviously wrong but it is amazing to note that scientists are still trying to work out how this important phenomenon actually functions. We (and the animals of this planet) have used this feature for navigation for centuries; yet, we still know surprisingly little about it. The best theories of how the magnetic field functions were worked out in the 1830s.

“Science News” recently had a short article on some experiments presently being performed that may shed more light on how the magnetosphere1 functions. The following quote from the article contains a simplified explanation of our present understanding of how such a field has come to exist on our planet.

As the planet rotates on its axis, electrically conducting liquid iron churns thousands of kilometers down in the outer core. The iron’s sloshing motion, in a process called a dynamo, creates and sustains Earth’s magnetic field. . . . Geophysicists don’t know exactly how the magnetic field got started billions of years ago or how it has managed to sustain itself for so long. It’s even a mystery why Earth has a magnetic field in the first place. Not all planets do. Tiny Mercury has one, for instance, while Mars has none. Stars like the sun generate powerful internal dynamos as well, and laboratory models filled with superhot metal might be able to re-create them.2

Daniel Lathrop, whom I have nicknamed, the “Magneto and Sodium Man,”3 is a physicist at the University of Maryland, who has built a spherical model in his laboratory. It is made up of two spheres nested one inside of the other and contains twelve tons of molten metal. The two spheres spin independently at high speeds in a manner that mimics the rotation of the earth’s outer crust and inner solid core with liquid metal in between. Compare the two images below. 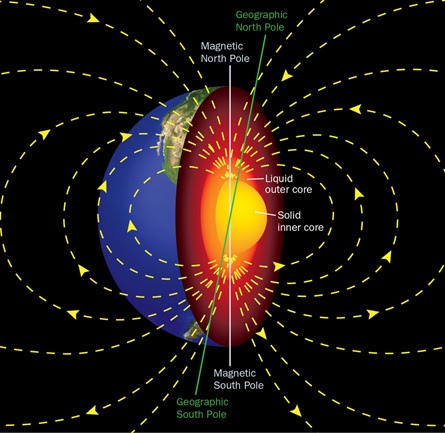 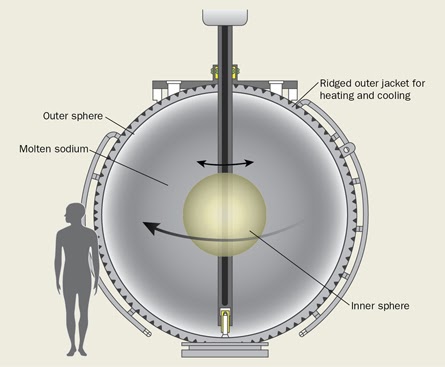 Lathrop thinks his “machine will have no problem generating a dynamo once it powers up to full speed, probably later this year.”4 The mechanism may also offer insights into magnetic field reversals like those seen on Earth.

I am always fascinated by grand experiments and people who take on the challenge of discovering what makes something work. Our planet still has many mysteries. I look forward to the results of these experiments in the near future.