Human Chromosome 2 is an interesting
example of evidence that suggests God used evolution to create humanity. Darrel Falk has made a series of YouTube
videos that explain why he believes that Chromosome 2 is evidence for God using
evolutionary processes.[1]
Here I will explain the basic concepts and leave it to the reader to
investigate further.
To understand this evidence, we must first understand
a little bit about genetics, chromosomes, and DNA. Chromosomes are the
structures that keep our DNA organized. In every cell of our bodies there are
strings of 3 billion base pairs of DNA. DNA is a string of adenine (A), guanine
(G), cytosine (C), and thymine (T) molecules strung together in a variety of
combinations that can be represented like this: 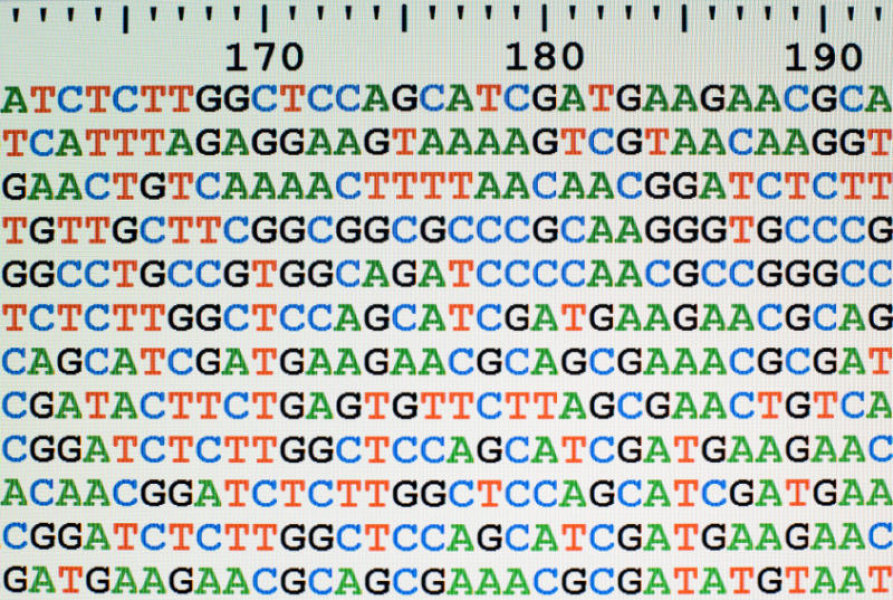 Notice that the strings of molecules can be
put together in many permutations and allow for an amazing amount of
information to be stored in this format. The image shown above is a
representation of one side of the DNA ladder. DNA pairs in such a way that A
pairs with T and C pairs with G, so the two sides of a DNA double helix can be
represented in the following way: 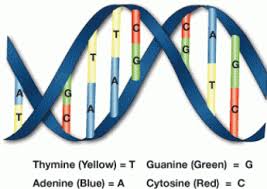 Chromosomes organize and constrain this DNA
into discreet packages that allow the DNA to be copied, moved around, and
accurately passed from one cell division to another and from one generation to
the next. The ends of the chromosomes have distinct DNA structures called
telomeres. In humans, the sequence of these telomeres is a number of repeats of
TTAGGG and these telomeres prevent DNA from unraveling, much like the tips on
the end of shoelaces prevent our shoelaces from fraying. Chromosomes have
centromeric structures near the centre of the chromosomes where proteins look
for specific conformations or shapes of DNA on the chromosome to grab the
chromosomes and pull them in a specific direction when cell division such as
mitosis or meiosis occurs (two forms of cell division in which the appropriate
amount of DNA must be segregated into each cell).
Most humans have 23 pairs or a total of 46
chromosomes that look something like this when painted with fluorescent dyes: 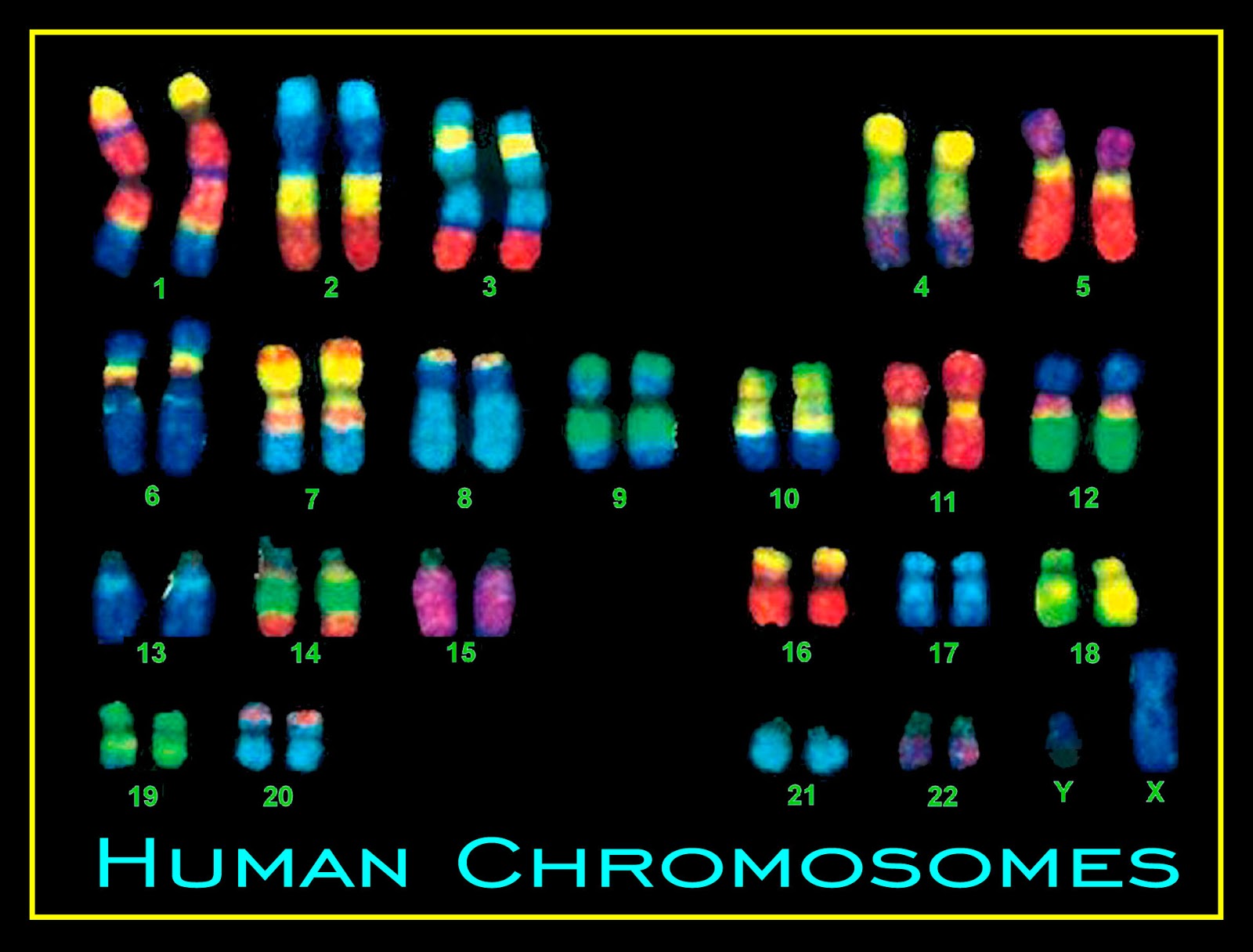 Telomeric structures would be at the ends
of each chromosome and centromeric structures would be at the darkened and
pinched-in point generally toward the middle of the chromosome.
Different species of animals have different
numbers of chromosomes. Here is a list of some animals and their chromosome
number. I will continue to speak of the number of pairs of chromosomes in the
typical animal, rather than the total number of chromosomes.
Mice have 20 pairs of chromosomes;
horses, 32 pairs;
donkeys, 31;
cows, 30;
tigers, 19;
lions, 19;
orangutans, 24;
gorillas, 24;
chimpanzees, 24;
and bonobos (pygmy chimpanzees), 24 pairs.
These last four entries represent the great
apes and are especially interesting to the rest of this article and we will
pursue this topic more in the next few paragraphs. But before we get there, let
me remind the reader that plants also have distinct numbers of chromosomes and
we could list some of those as well. The coffee plant has 22 pairs of
chromosomes whereas the pineapple has 25 pairs. The number of pairs of
chromosomes is one mechanism that acts as a boundary between species and
prevents the crossing of one species with another. There are a few rare
exceptions such as horses and donkeys in which cross-breeding is possible despite different chromosomal numbers, but
for the most part, such crossings fail. This is sufficient background regarding our DNA and its
packaging into chromosomes to remind us that our bodies are fearfully and
wonderfully made and that there is still much to learn about how the mechanisms
of genetics work.
Now we come to the interesting instance of
human Chromosome 2. As noted above, humans have 23 pairs of chromosomes while
the great apes have 24 pairs. If we look closely at and compare the chromosomes
of humans and the great apes, a good deal of similarity is noted. G-banding
patterns are a crude method of looking at the overall structure of chromosomes,
but they are instructive in showing the similarities of chromosomes.
Traditionally, this G-banding technique has been used to uniquely identify and
arrange each of our 23 pairs of chromosomes.

What becomes immediately apparent at a
crude structural level (and is further borne out in the actual DNA sequence of
the chromosomes) is that human Chromosome 2 looks like a fusion of two chimp
chromosomes. In fact, as we analyse the DNA sequence of human Chromosome 2, we
find telomeric repetitive structures in the middle of Chromosome 2 (when they
should only be at the ends of the chromosome) and a second, non-functional,
centromeric structure where one would expect it would be if the chromosome
resulted from a fusion event.
What this suggests is somewhere in the
evolutionary development of humans, a fusion event occurred which resulted in
the reduction of the number of chromosomes to 23 pairs for the humans and
human-like species, while the great apes continue to have 24 pairs. The
following diagram represents the phylogeny (or family-tree) with regard to this
one feature (note, this diagram speaks of 46 and 48 chromosomes rather than 23
and 24 pairs). The question mark next to Neanderthals in the diagram represents
the fact that, although the chromosomal number for humans and Denisovans has
been experimentally confirmed, we do not presently have DNA of sufficient
quality from Neanderthals to experimentally confirm that Neanderthals indeed
had 23 pairs of chromosomes.[2] 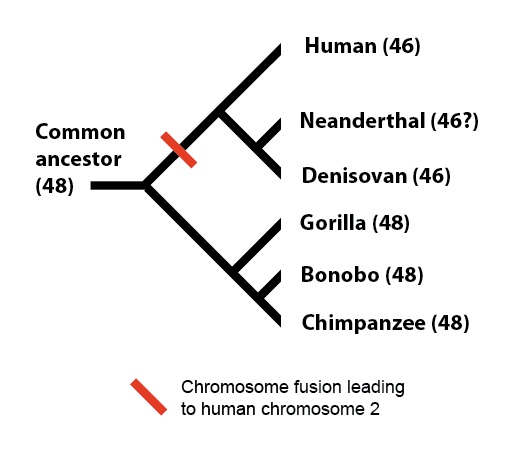 [3]
Such evidence supports the idea that God
used an evolutionary process to create species including the human species. It
would indicate that we share a common ancestor with the great apes and that at
a certain point in the evolutionary process our line diverged from the family
tree of our ape cousins. It does not detract from God as creator and does offer
insight into the mechanisms he used as he created.
A blog of this nature can only whet the
reader’s appetite for further investigation into such topics. As previously
stated, Darrel Falk’s YouTube videos may be the next place to turn for further
understanding. The BioLogos website at biologos.org is always a great resource.
Perhaps this blog might also open doors for respectful conversation, logical
analysis, and a hunger and thirst for truth wherever it may be found. God is
indeed the great creator and the mechanisms of biology are no surprise to him.
We can continue to be confident that he is guiding the universe and guiding his
revelation to those who seek him.
[1] Darrel Falk series of YouTube videos regarding the human chromosome
2 fusion:
Part 1 – https://bit.ly/2JUIKeq
Part 2 – https://bit.ly/2HJbTEz
Part 3 – https://bit.ly/2HJsRCJ
[2] See “Denisovans, Humans and the Chromosome 2
Fusion” September 06, 2012, BioLogos
Blog, Dennis Venema,
https://biologos.org/blogs/dennis-venema-letters-to-the-duchess/denisovans-humans-and-the-chromosome-2-fusion
[3] The diagram is from “Denisovans, Humans and the Chromosome 2
Fusion” September 06, 2012, BioLogos
Blog, Dennis Venema, https://biologos.org/blogs/dennis-venema-letters-to-the-duchess/denisovans-humans-and-the-chromosome-2-fusion
Tags: Chromosome 2, DNA, science, science faith evolution biology genesis