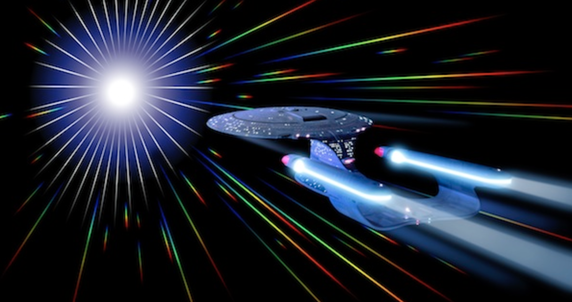 Elon Musk is a contemporary industrialist who has been compared to a real-life Tony Stark. But here are two names you may not yet have heard: Harold “Sonny” White and Zefram Cochrane. As any Star Trek fan will know, Zefram Cochrane is the fictional inventor of the fictional Warp Drive. His name or his character appears in several episodes, movies, and versions of the Star Trek franchise. On the other hand, Harold "Sonny" White is a researcher who is attempting to invent genuine warp drive technology that would allow the human race to travel to places beyond the reach of the fastest spacecraft of today. Thus, he could turn out to be a real-life Zefram Cochrane. Although you may have watched many episodes of Star Trek and other movies featuring warp drive, you may now be asking, “What is warp drive technology?”
According to Star Trek’s pseudo-technology, creating a warp field around a spaceship results in changes to the fabric of the space-time continuum, such that the normal laws of physics do not apply. The spacecraft may travel at rates less than the speed of light, while the space-time warp opens holes in the fabric of space and time such that the relative movement of the spacecraft, and everyone inside it, appears to be greater than the speed of light. It’s alright if you don’t understand what I just wrote, simply repeat after me and wave your arms around as if you were describing a warp cocoon around an Enterprise ship and people will believe you just like they believe the Star Trek writers.
Now, let’s get back to Harold White. White has received research funding to look into the possibility of warping the space-time continuum such that objects might travel through space and, relatively speaking, the objects would get from one place to another in less time than it would take light to travel the same distance. In other words, he is working on creating a warp field for faster than light travel. The journal, Scientific American devoted an entire article to the news about "Sonny’s" research.  What do his colleagues think of this? Most are highly skeptical that his research will bear fruit. Most would say that any kind of faster-than-light-travel is impossible. Yet, in terms of pure research with potential for a tremendous practical outcome, it is certainly worth the gamble of a little bit of research money. The colonizing of other planets, other solar systems, and other galaxies depends upon someone finding a way to get places fast. Why not spend some time, money, and energy on a possible solution?