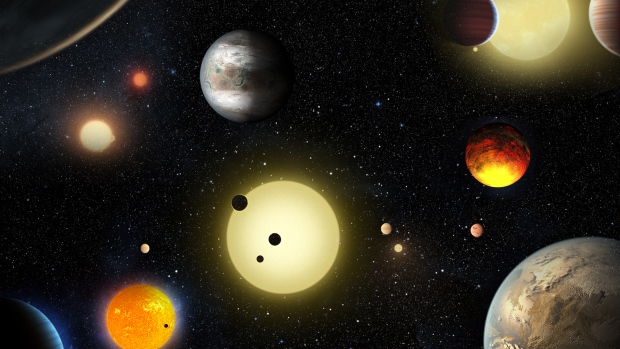 How many planets would fit into a Milky Way
galaxy? This is certainly not a classic philosophical question like, “How many
angels would fit on the head of a pin?” Yet, this question does have
philosophical implications if you consider why planet hunters hunt planets.
Some, certainly search for planets in our known galaxy because planets are
there and we want to learn more about them; but, many who search for exoplanets
(planets outside our solar system), do so because they are interested in the
possibility of life on other planets; intelligent or otherwise.
The Keplar Space Telescope has recently
catalogued 1284 more planets,[1]
bringing the total number of discovered planets to 2325.  The size of these planets ranges from
sub-Mercury to super-Jupiter in size. Some are rocky, some are gaseous, and
some just might be habitable. Bob McDonald in a CBC News blog[2]
suggests that there are likely more planets in our galaxy than there are stars.
Take a look at the night sky and think upon that for a few moments. There may
be as many as 10,000,000,000 planets in our galaxy alone. There are more than
100 billion galaxies in the known universe. As we consider only the planets in
our galaxy we soon realize that they are too distant by today’s transportation
methods for us to visit them with anything more than a telescope, but they are
still of interest. Could any of these planets have indigenous life? Would life
there be water and carbon-based? Would it be DNA based? Or might it be so
foreign in its composition that we would struggle to recognize it as life?
Might it exist in liquid water, on dry land, or in the gaseous atmosphere of
one of these exoplanets? Would we see signs of communication among creatures of
common ancestry? Might we see foliage changes as seasons progressed? What could
we look for as signs of life; or signs of intelligent life? Philosophically,
the number of planets that would fit into a smallish galaxy appears to be a worthier
question than those regarding pins and angels.
[1] “Kepler telescope doubles its count of known exoplanets: latest data confirm nine more worlds in
‘habitable’ zone”; Science News, May
10, 2016;
https://www.sciencenews.org/article/kepler-telescope-doubles-its-count-known-exoplanets