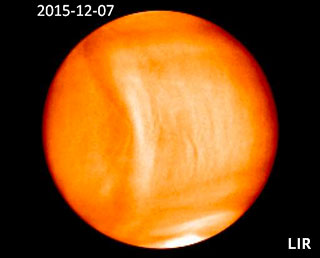 On April 1, JAXA, the Japan Aerospace
Exploration Agency, gave a brief update on the status of their Akatsuki
spacecraft now in orbit around Venus. You might recall that this is the
exploration vehicle that missed its exit on the way to Venetian orbit and, instead,
ended up in orbit around the sun.[1]
This orbit took it as close as 90 million kilometers from the sun,[2]
which may not sound all that close, but it was close enough to raise concerns
that the craft’s mechanics might fail due to excessive heat. Fortunately, after its close encounter with our giant ball of fire, the
spacecraft was found to be functioning well.
Approximately five years post launch,
trajectory engineers were able to nudge Akatsuki into a suitable orbit around
Venus. The orbit is much larger than originally intended: one orbit every 9
days instead of one orbit every 30 hours.[3]
However, the onboard cameras have already sent back some impressive images of
cloud formations in the upper atmosphere.[4]
We can expect much more data and many more updates in the months ahead.
[1] Thirst, “Yesterday I
Missed My Exit on My Way to Sears,” December 10, 2015; https://www.keithshields.ca/2015/12/yesterday-i-missed-my-exit-on-my-way-to.html