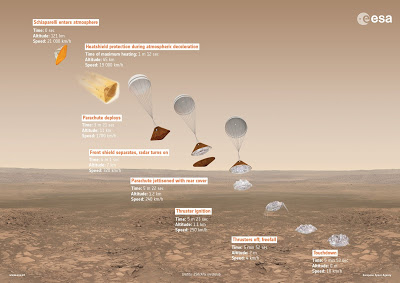 ExoMars is a “Programme to investigate the Martian
environment and to demonstrate new technologies paving the way for future Mars
sample return missions.”[1]
The European Space Agency successfully launched their two craft on March 14 on
a Russian Proton M rocket and has received signals indicating that the launch
was successful. The two craft will continue to travel together for the next
seven months and will then separate for two unique tasks shortly before arrival
at Mars. The orbiter will measure trace gasses in the Martian atmosphere and
will particularly look for gasses such as methane that could be evidence of
life on the red planet. The orbiter will also seek to identify the source of
these gasses.
Three days before orbit insertion, the two space-craft will
separate allowing the Schiaparelli lander to aerobrake, deploy a parachute, use
its heatshields, and land in the Meridiani Planum. This area is known to
contain “hematite, an iron oxide that, on Earth, almost always forms in an
environment containing liquid water.”[2]
The Meridiani Planum region is significant because it has
been explored by the Opportunity Rover[3]
and a good deal of information about potential locations of water and minerals
has been determined. If significant amounts of water can be located, it may be
possible to use that water to generate electricity and rocket-fuel so that a
spacecraft might make a return voyage. To this point, all missions to Mars have
been one-way trips. This is what ESA means when they say that this mission
could “pave the way for future Mars sample return missions.” ESA, NASA, SpaceX, and the
entire scientific community will be watching this mission for the next several
months.
Works Cited:
ESA: Robotic Exploration of Mars;
“ExoMars.”
Science News, March 11, 2016
Wikipedia, “Meridiani Planum.”
[1] Science News, March 11, 2016; “ExoMars Mission to Search for Signs
of Life on the Red Planet”; accessed 2016-03-16; https://www.sciencenews.org/blog/science-ticker/exomars-mission-search-signs-life-red-planet?tgt=nr
[2] ESA: Robotic Exploration of Mars; “ExoMars”; accessed 2016-03-16; http://exploration.esa.int/mars/47852-entry-descent-and-landing-demonstrator-module/
[3] Wikipedia, “Meridiani Planum,” accessed 2016-03-16; https://en.wikipedia.org/wiki/Meridiani_Planum
Tags: aerospace, ESA, Mars, Mars landing, science, Space