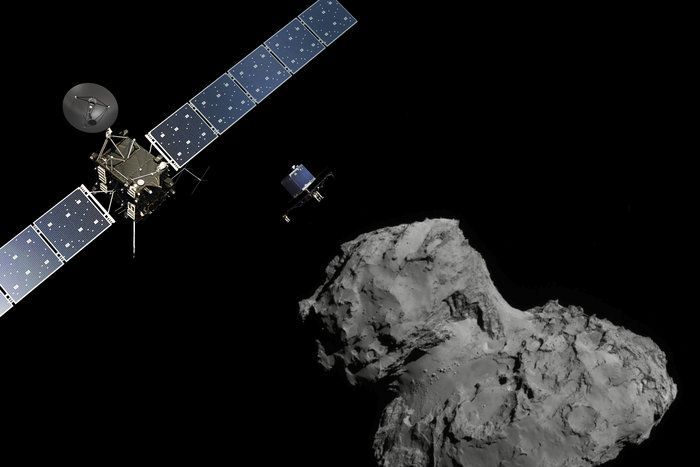 In November of 2014, the Rosetta spacecraft delivered the Philae lander to the surface of Comet 67P/Churyumov-Gerasimenko (see my previous blog here). This represented the first soft landing of a spacecraft onto a comet. This in itself was a great accomplishment despite the fact that the mission did not go quite as planned. The Philae lander was intended to send back data on the composition of the comet but landed in a region where its solar panels were shaded by a cliff and, after 57 hours of operation, it could not recharge sufficiently to achieve all of its science operations. The onboard computers powered down into hibernation mode and its orbiting partner, the Rosetta spacecraft lost radio contact with the lander.

However, as anticipated, as the comet has continued its approach to the sun, and solar energy has become more intense, the Philae lander has been able to recharge sufficiently to reconnect with the Rosetta orbiter. The European Space Agency (ESA) has confirmed that on June 19, 2015 several packets of lander information were delivered to Rosetta1. The two spacecraft are again communicating and this is a very hopeful sign for the mission analysts. The comet will make its closest approach to the sun on August 13 and the agency is hopeful that the increasing solar intensity will allow the lander to continue to gain charging capabilities and restart its science operations.

Meanwhile, the Rosetta spacecraft continues to send images and scientific data to earth as the ESA has extended its mission until September 2015. Rosetta will continue sending back images and data related to the comet while anticipating more data from the Philae lander. The European Space Agency continues to dream about how best to utilize both vehicles and is now considering landing Rosetta on the comet at the end of its lifespan. The ESA even has a cool mini-movie that addresses the importance of such missions that is designed to inspire ambition. Check it out here.