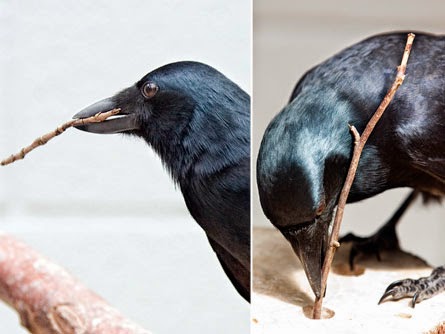 Those who regularly read this blog will know that I have a fascination with crows. I have repeatedly sung their praises as one of the most intelligent animals on the planet (see here; here; and here). So, when I read another paper about crows and tool use, I naturally wanted to write about it here.

The results of a study published in the journal, Proceedings of the Royal Society B1, show that not only do New Caledonian Crows use tools, but they also store them for future use. Crows who use sticks to extract food out of holes in the ground or holes in trees will sometimes set the stick aside in a safe place to ensure that the tool is available for the next time it is needed. The authors suggest that the birds are being protective of their tools. We might compare this to the way some humans protect and organize tools in their garage.

While reading this paper I followed some of their references and was surprised to find another paper that referred to a number of aquatic species that use tools. I did not know that there were so many animals capable of tool usage. There are species of dolphins that “wear sponges for protection during foraging;” sea otters that use kelp as a net to trap prey; other sea otters that use rocks as hammers to open shells; and hermit crabs that “carry anemones for protection from predators.”2 It seems that tool usage is a well-documented phenomenon in a number of species. I look forward to better understanding this behavior in the future as we continue to be surprised by the world in which we live.