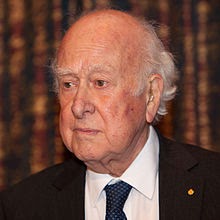 I “went down a rabbit hole” in Wikipedia today. I wanted to better understand gravity. On the face of the matter, it seems like a simple enough question: “What is gravity and how is it mediated?” I went cross-country skiing on Saturday and felt its effects; but what is this force that keeps me on the planet and slams me to the ground when I take a spill? The articles in Wikipedia left me wondering if it is possible to know anything for sure. Some physicists have spent their entire lives trying to understand this one force in the universe. It is thought that there must be an elementary particle that mediates gravity. The hypothetical particle, that has not yet been experimentally confirmed, is called a graviton. Could there be particles traveling between the mass of my body and the mass of the earth that pull the two together? Could these particles be traveling between our planet and the moon to keep it circling around us? Could these particles be traveling between the moon and the oceans of the earth to create tides? We know that light can travel large distances through space. We even know that light is made up of discreet little particles called photons. We know about other elementary particles that act in similar ways: W bosons, Z bosons, and gluons. In 2013 one more elementary particle was confirmed: the Higgs Boson. This particle mediates mass rather than gravity.

But, this just takes one further down the metaphorical rabbit hole for this brings us face-to-face with difficult questions about what other particles exist in the universe. The answer is that our universe and even the immediate neighbourhood is made up of a whole zoo of known particles: six types of quarks and six types of leptons which come together to form atoms. Then there are all of the anti-quarks and anti-leptons of anti-matter. Yes, such things do exist outside of the Star Trek universe. Before I lose my audience completely I will mention one other form of matter in our universe: dark matter. “Dark matter is one of the greatest mysteries in modern astrophysics.” There may be as much as five times more dark matter than ordinary matter in the universe, yet “it cannot be seen directly with telescopes” and “it neither emits nor absorbs light or other electromagnetic radiation at any significant level.” The existence  of dark matter can be inferred from its “gravitational effects on visible matter, radiation, and the large-scale structure of the universe.” This rabbit hole is considerably deep and complex.

As Edward Witten, an American theoretical physicist and professor of mathematical physics at the Institute for Advanced Study in Princeton, New Jersey said,

“Albert Einstein famously devoted the later part of his life to seeking a theory that would offer, at least in principle, a comprehensive description of the laws of nature. . . . In fact, there are ample reasons why one might doubt whether Einstein’s vision is achievable . . . Crucial clues may be hopelessly out of reach. . . . Moreover, even if we could somehow find the unified field theory, it is not at all clear whether we could determine that it is right. . . . some of the most important phenomena may be permanently beyond our experimental reach.”1

Theoretical and experimental physicists alike have made many significant discoveries in the last century and certainly we can expect that more will be made. As the Large Hadron Collider near Geneva, Switzerland is scheduled to be restarted in May of 2015, there is much hope that further experimentation will confirm the properties of even more elementary particles. Yet, it would also seem that with such a long list of particles to examine, the data may take years to generate and interpret. Meanwhile, researchers have still not found the gravitons that pulled my hip resolutely toward the frozen ground. Perhaps I need to get out of this “rabbit hole” and go skiing more often.