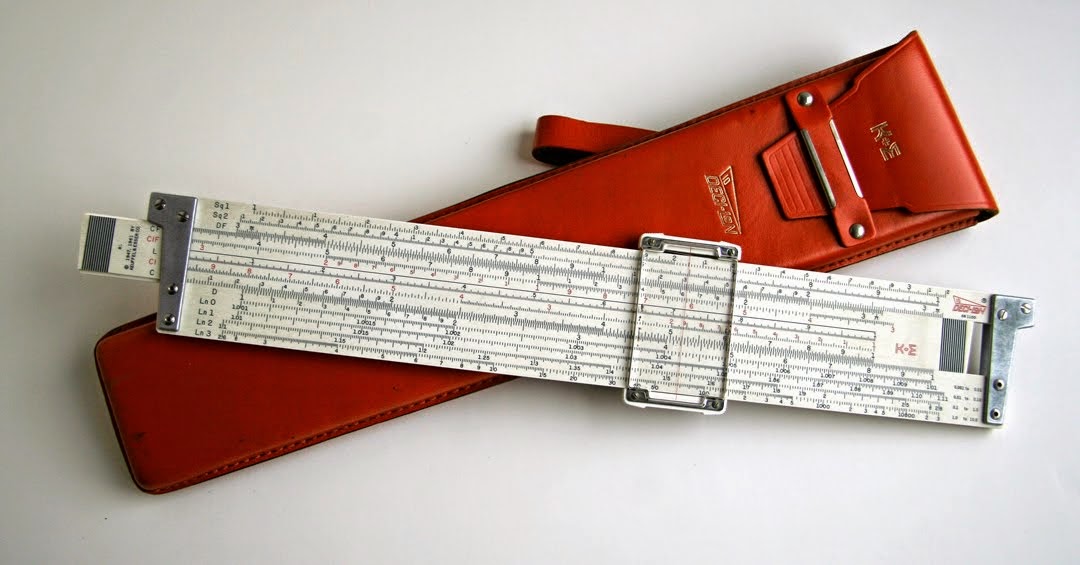 (Click on the thumb-nail image for a larger picture.)

In my junior high education we used logarithm tables to do specific types of math and in grade 10 science I purchased a slide rule to do my calculations. In 1975, calculators were not very sophisticated, they were expensive, and my physics teacher believed we all should learn how to use a slide rule. So when I read a paragraph in a 2014 Science News article, I felt like someone had put my picture in the dictionary beside the definition of old. For there I read:

You may find this hard to believe, but there are people still alive today who once did their mathematical calculations by sliding sticks back and forth. No keypads, no batteries, no LEDs. Just sticks.
Yes, it sounds like a device from the Stone Age, but as late as the 1970s scientists and engineers commonly used such a stick-sliding device, known as a slide rule, to perform multiplication and division and other tasks like extracting square roots. Working versions of these instruments still are on display in museums today.1

As I sat reading these words in my office I reached over to the top drawer of my desk and pulled out a familiar cloth case containing my 1975 slide rule. A thing of beauty, a logarithmic scale on two sticks. I slid the sticks and cursor and did a quick calculation to convince myself that my brain was not ready to be on display in a museum. “I’ve still got it,” I thought, and then marveled at the rapid advancement of science, math, and communication witnessed in those 39 years. Programmable calculators were one of the next significant developments and in 1977 I had to shell out $120 for my first Texas Instruments (TI) calculator for a calculus course I was taking. It had less computing power than the GPS watch now on my wrist or the phone now in my pocket but was capable of solving formulas with the push of just a few buttons. Of course that was only after I had correctly entered all of the formula operands into the temporary memory of the TI (sometimes no small feat). The home computer revolution followed quickly after this and as the computers got more powerful their footprint got smaller.  Calculations that had previously been done on devices that took up a whole room were now worked out on top of our desks.

Computing took another huge leap forward when ARPANET allowed communication between computers around the world. As the World Wide Web (or Internet) grew, so did our ability to share and store information. My first forays into the “bulletin boards” of the ARPANET were to find information that research labs had stored about the chromosomal locations of common genetic disorders in humans. This information allowed me to work out experiments in which I was able to determine the probability that a patient in our clinic would develop a certain genetic disorder present in her family. I used a search program known as the Gopher protocol which was fast and efficient . . . just like my slide rule. Advancements in knowledge and search engines mean that we now have a much larger array of information available to us on a massive range of topics. Much of this began 400 years ago with the invention of the logarithm.