In 2003, I left the Molecular Diagnostic Lab at the Alberta Children’s Hospital to follow a call to start new communities of faith. For 13 years I had worked in the field of molecular genetics. My job as a Lab Scientist was to take the latest developments in DNA technology from the realm of research to the world of clinical diagnosis. We served families with genetic disorders throughout Southern Alberta and across Canada (DNA samples came into our lab from as far away as Newfoundland and Labrador). We also performed forensic analysis for the RCMP before they developed their own forensic lab in Edmonton (with some of the staff from our lab).

Although we had other molecular techniques available to us, DNA sequencing was always one tool in our analysis of human genes. “Sequencing” is where one moves the DNA through various media to separate it into smaller and smaller pieces until finally it is possible to determine the order of the base-pair components in a short string of DNA. The goal is to be able to “read” what an individual person’s DNA constituency looks like at any particular place in their genome. In the late 1990s we could sequence two breast cancer genes in about three months. Analysis of the sequence code was done as the sequences came off of the sequencing machine. One scientist made this her full-time work to accomplish the sequencing within this time-frame. This was considered state-of-the-art technology and analysis at the time. This was time-consuming work and prone to human error due to the long hours of eye-strain looking for small differences in peaks and in the colours of waves.

About that time, I watched the movie Gattaca; I watched with a great deal of envy for how simple DNA sequencing was done in that dramatic story. In just a few minutes, at a drive through window, a technician would give a reading of all of the major genes related to the unique identity of a person. The quick sequencing revealed the person’s intelligence, stature, eye and hair colour, personality, and many other significant traits. Of course it was just fiction; but, as a recent article in Science News shows, fiction is quickly becoming fact. 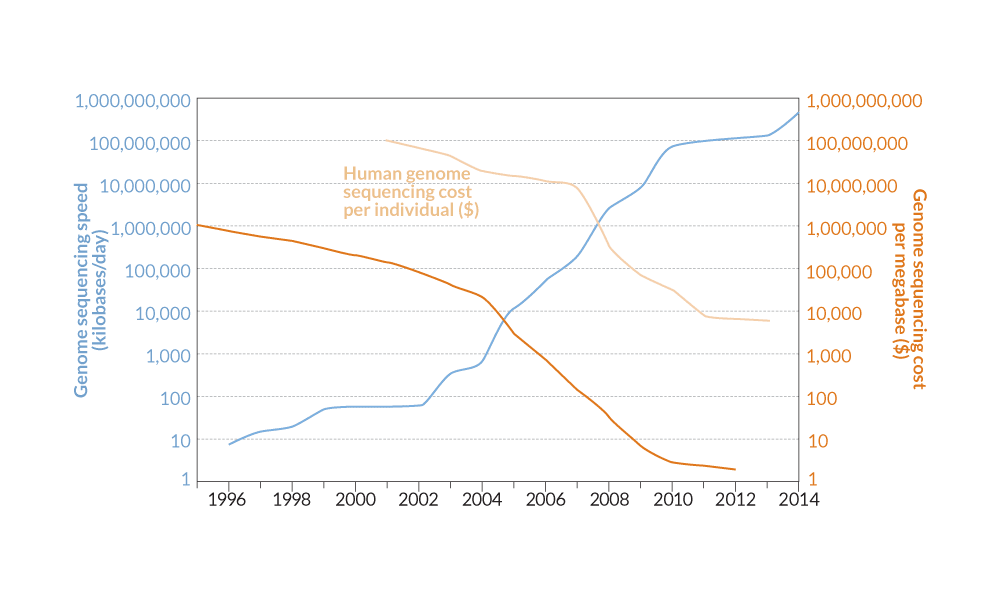 As recently as the 1980s, scientists collected genetic data by laboriously tracking the diffusion of DNA molecules through slabs of gel. Now researchers stand by as machines gush billions of letters of DNA code a day, and struggle to cope with the data deluge.
In the past two decades, the speed of sequencing has leapt from around 10,000 bases per day per machine to more than 1 billion (above, blue). Since the introduction of high-throughput machines in the mid 2000s, costs have plummeted (above, orange) and the price of sequencing a whole human genome (above, gold) has tumbled almost to the long-anticipated figure of $1,000.2

In fact, if you had $30,000 and a few days for someone to work at it, you could probably get the sequence of your entire genome; not a bad price. Of course, if you were foolish enough to print out the string of code, it would cost you considerably more for the 1.2 million pages of paper and ink. Then, there is the data analysis. Still, we are getting closer to a Gattaca-like future. Will our ethical conversation catch up to the technological advances? Not likely.

Technological developments such as these are behind the ability to compare the Neanderthal, Denisovan, and Homo Sapien genomes in detail.2 The computers which crunch this data can also crunch the statistics that allow us to make observations about population genetics. This is the stuff that allows scientists to make estimates of how many humans were around at any point in history. The science suggests that there were never less than a few thousand humans alive at one time. As we seek to understand scientific advancement in a world that moves forward at an ever faster rate, it will take piety and sincere listening for the voice of the Holy Spirit to continue to be a follower of Jesus, a science enthusiast, and member of the Body of Christ. May we continue to pursue these goals.